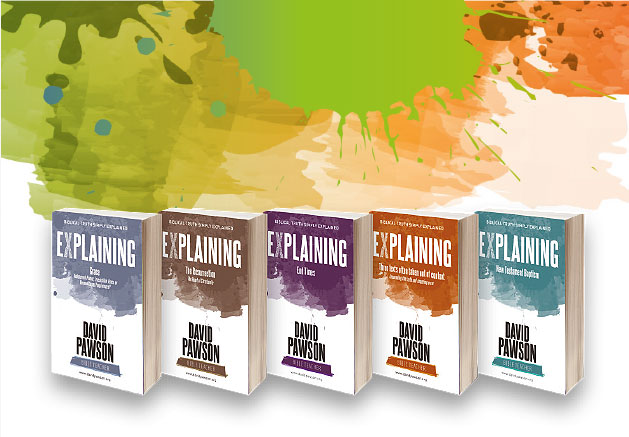 David has also launched an Explaining Series that teach what the Bible says about subjects important to becoming a Christian and growing a relationship with a living God. ‘Biblical Truths Simply Explained’ find out more at: explainingbiblicaltruth.global

A speaker and author with uncompromising faithfulness to the scriptures, David brings clarity and a message of urgency to Christians looking to uncover hidden treasures in God’s Word. David Pawson was born in 1930. His father was a Methodist minister and his grandfather, a Professor of Agriculture. David, however, began his career with a degree in Agriculture at Durham University, England. With a newly acquired farm in Scotland, he was surprised when God intervened and led him to become a Christian minister.

After completing an MA in Theology at Cambridge University, David became a chaplain in the Royal Air Force for three years. From there he moved on to pastor a number of churches in England including the Millmead Centre in Guildford, where under David’s caring leadership, the church became a model for many UK church pastors. His time at Millmead was also his most fruitful in terms of the library of his audio teachings. In 1979 David was released from the Millmead Centre to fulfill a wider international ministry.

David authored more than 80 books, some of which include: The Normal Christian Birth, When Jesus Returns, The Challenge of Islam to Christians, Word and Spirit Together, Once Saved, Always Saved? and his ‘Unlocking the Bible’ series of 98 videos available on online or on MP4 or DVD. David also compiled a Christian Discipleship Training series ‘Explaining Biblical Truth’ that sets out to simplify what the Bible says about subjects important to Christians wishing to grow in relationship with a living God. Find out more at: www.explainingbiblicaltruth.global

David’s latest catalogue of books can be downloaded here.

After leaving Millmead Baptist Church in 1979 David Ministry developed internationally predominantly to church leaders worldwide. Over the years, Millions of copies of his audio Bible teachings have been distributed worldwide, and now many more millions of people worldwide watch his videos on the ‘Official David Pawson YouTube Channel’ click here.

A writer and speaker of clarity and uncompromising faithfulness to the Scriptures, David is widely considered to be one of the world’s finest biblical expositors of modern times.

In 2006 David established a Trust (now called The David Pawson Ministry CIO) as a nonprofit making trust designed to protect and promote his teaching for future years. David’s aim has always been to make all his teachings available freely worldwide. The Trust continues the work of transcribing and translating the teaching library into other languages including Mandarin, Spanish, and many other international languages. All recordings continue to be available on CD, DVD and MP3/MP4 from David’s distributors,—for a list of Distributors click here.

David continued his teaching Ministry right to the end of his days completing his final work – ‘a New Testament Commentary on Colossians’ from a Nursing home where he spent the last year of his life. David eagerly looked forward to meeting with the Lord and in 2020, shortly after celebrating his 90th Birthday, David’s desire to meet Jesus was fulfilled.

His legacy is an incredible teaching Library, which the Trust intends to protect and do everything it can make it available to as many as possible, in local languages and free to download, to ensure that: ‘His ministry continues’

We are pleased to offer you free access to his teaching library, but his ministry is not without cost. If you have been blessed by David’s talks, we invite you to be a partner in his ministry through your financial support of our work, including the current task of transcribing and translating the teachings into Mandarin, Russian and Latin American languages — click here to make a donation. Thank you and may our Lord bless you!